Shopping Cart
Your Cart is Empty
Quantity:
Subtotal
Taxes
Shipping
Total
There was an error with PayPalClick here to try again

Thank you for your business!You should be receiving an order confirmation from Paypal shortly.Exit Shopping Cart

From CNN to Mexico to Maras 18 and Back Again.

While undergoing a pair of operations on my spine earlier in the summer I was able to watch some TV. Being forced into some bed-time actually provided some fruitful insights. I saw an episode of Reza Aslan’s CNN series, Believer, where he discussed Santa Muerte [Saint Death]. At issue is not the validity or controversy over this propagandists’ intentions, after all, out of the mouths of babes often comes some of the most revealing truths. Beyond my yelling at the screen over the questions he would not ask when speaking with Santa Muerte’s devotees another perspective come to mind (Lev.19:31; Isaiah 8:19). In the middle of the program he went to have dinner in a private home in Mexico City.

Within this humble kitchen he sat at the table ringed with transsexual Mexican prostitutes. Obviously, they represent a subset of a subculture in every aspect. This marginalized and utterly disenfranchised group of twenty-somethings each professed their adoration and assurance in Santa Muerte’s unconditional love, protection and guidance over them in their high-risk daily lives. However, what stood out the most to me, while simultaneously breaking my heart, were their unanimous reasons for fleeing the Church in order to be embraced by the “Boney Lady” (a euphemism for the Saint of Death). They decried that the Church had closed her doors to them because of “who” they were and “what” they did (Lk. 5:31-32). Aslan, being not a Christian, never followed up with the pertinent questions which would have revealed the Church’s great error, and thus, our greatest of sins. 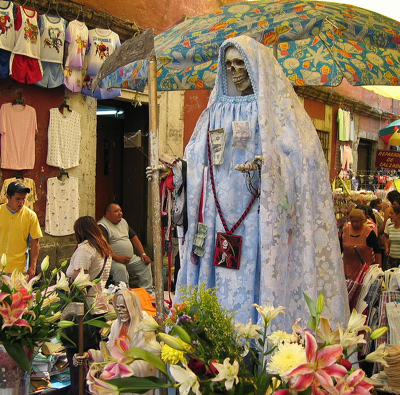 Christ Jesus clearly meant for his earthly body to be a place of healing for the sick and not merely a museum for hypocritical and self-righteous saints. Unique to Latin America is the truncated gospel of one having to already be purified in order to enter our King’s earthly palace; for the sanctuary doors remain closed and tightly locked to all those whose sins are still fresh [cf. Rm. 5:8]. These precious beings made in the image of God have been so plagued by the sins in their lives and so broken in despair that once the Church had rejected them they willingly fled to the anathema of the Light (Jn. 1:4). This is more than an enigma. These transsexual prostitutes are not the problem, they are not the disease. But rather, they are the symptom of the cancer which has eaten-away at the Church’s core. Please note, I am not advocating in the Church accepting their unrepented sins…it is just the contrary. What the world needs most is not food, health, wealth, miracles or even freedom. What we need most is forgiveness. In the order of salvation, it is forgiveness that must come first and it is from this well that all the inhabitants of earth dream to drink. By both instinct and necessity, if the Church is not where a sinner can encounter forgiveness then they will search elsewhere.

I preached on this topic during my first sermon upon returning to Guatemala after my medical leave. I shared how, in just the past two decades, no other religion or group has grown faster in Central America and among Latinos in the U.S. than those worshiping Santa Muerte. This expansion includes street level gang members and university students along with doctors and attorneys on both sides of the border. I would like to explore the contexts for the reasons another time as they are not complex nor diverse but are, in staggering reality, painfully simple and clear as I touched upon above. They Church has lost her way and has occupied itself in working to reflect the very world she was called out of in vain attempts to gain more converts (Jn. 17:16). She has busied herself with programs, campaigns and PowerPoints while replacing Holy Scripture with slogans and false prosperity doctrines; while leaving behind the radically forgiving and ultimately saving power of the Gospel of Christ Jesus.

Pastorally speaking, when one preaches the Word it is not theirs to own nor to direct how it will be received. Lord willing, it will have the power to transform those who hear. I wove the story above into the fabric of my sermon nearly a month ago. I called out the Guatemalan Church, and ourselves, for truly not welcoming our neighbor nor loving those who do not love us and of our lack in offering true forgiveness to others (Mt. 5:43-48; 6:15). One of the sisters came up to Damaris after service this past Sunday to share what had happened over the past couple of weeks after feeling convicted of abandoning Jesus’ words during that earlier Sunday’s sermon. She related the following testimony to my wife. 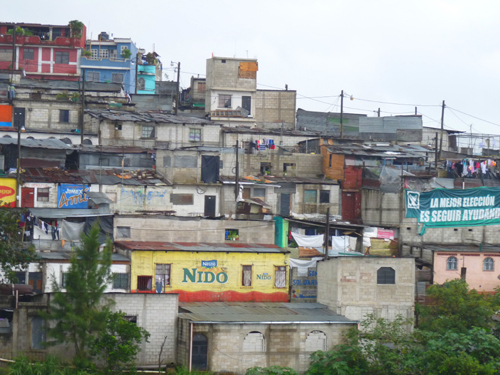 Her son owns a car repair shop in rough area of Guatemala City choked with auto mechanics and chop-shops. He kept allowing one of the local young men to hang around his shop and even let him sweep the floors for a little pocket money. One day our dear sister stopped over for a quick visit. She was shocked and scared to see the young man whose body was covered in the black tattoos of the infamous Maras 18 gang. She immediately scolded her son while demanding that he tell this man to leave and never return (Lk. 6:37). She yelled and screamed, asking him how he could let that thief and murderer hang around his shop? “He a Christian after all,” she told my wife!

Our sister, continuing, telling my wife that the very next Sunday she heard my message and she felt the sting of truth and remorse piercing her broken heart (Heb. 4:12). She asked herself how she could have been so calloused towards the young man in the words she screamed towards her son. That same afternoon she took the bus over to her son’s shop and apologized for her coarse words and cold heart (1 Jn. 4:19). Our sister told her son to go and find this man and allow him to come back. Sometime on Monday afternoon, heading his mother’s advice, he found this tattooed young man and offered him a job doing odds and ends around his shop. Over the next two weeks this ex-gang member was the first to arrive and the last to leave. Our sister’s son told her that he had never had an employee work as diligently as this man nor listen so intently to his instructions in all the years that he had owned his shop. They even began to share their break times together and during those cups of coffee her son began to evangelize the ex-gang member. As the days turned into a week and then another one, their relationship grew deeper. Amazingly, in those brief few hours of sharing the Gospel, this ex-criminal’s heart soften and he came to know Christ (Js. 1:21).

Our sister came to service this past week with both the look of profound sadness juxtaposed against extreme joy. Her expression is what sparked the conversation after service with my wife. She explained that one late afternoon when waking home from her son’s shop the young man was gunned down. He was murdered right in front of his home presumably for the sins of his past. Yet, thanks to the power of the Holy Spirit to convict, inspire and direct, she asked her son to hire this young man. And his last conversation, in this life, was about Christ Jesus’ heart to love the lost and the repentant.

While listening to my wife’s cracking voice and in seeing her joy filled tears in retelling me the details of this most powerful event, I could not help but give thanks to the Lord our God for blessing us to play such a minor role in his great work!

Turning back to those Mexican transsexual prostitutes, I imagine how their lives could be transformed if they could only hear the true Gospel of forgiveness in being welcomed into the King’s sanctuary (1 Jn. 1:9). I imagine the peace upon their faces when freed of their personal demons as they lay their sins at the feet of our merciful and gracious Christ. This young man was shown the Gospel of Jesus and he now sits at Father Abraham’s table awaiting the Second Advent (Lk. 16:22) instead of in the bones Death’s false saint.

In the Lord’s great providence, I watched this single episode on CNN, and was given a fresh perspective on where the Latin American Church is today and how her frail health is drastically effecting the lives, and very souls, of those who are so desperately in need of her. May we not become blinded by the symptoms but may the Lord give us the theologically critical eyes to see the tumor, to see our sins, at the heart of his earthly body; and may he give us the courage to excise this malignancy while allowing our Lord God to guide our hands.